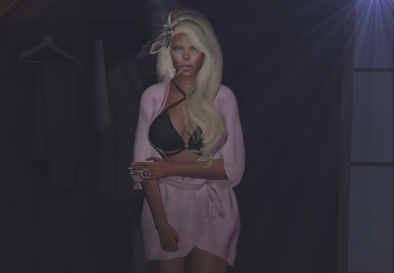 The breeze slipped through the little wood and stone chalet Vera was supposed to be staying in with her husband, Corbin. He had talked her into this whole idea of taking an impromptu trip to the middle-of-nowhere in Germany and basically left her sitting there with no way to reach him or no way to get around. He had taken the hired car to go to where they were shooting a movie nearby. He said he knew someone on the crew and wanted to hang out while they did their thing on the set. Said it would be for fun.

She knew what he said, but she knew what it really meant. He was looking into fucking someone else.

She inhaled the smoke from her joint and paused before she let it slip out slowly into the already-smokey room. Scoffing, she shook her head and couldn’t help but smile at the irony. She had snagged him from another woman and now he was fucking his next target. She became the ex, just he hadn’t respectfully broken up with her yet.

That was how he did it time and again, and she had been foolish enough to believe that he was going to be any different with her. She had confronted him a few weeks back and he started to turn an icy shoulder to her and would “punish” her with days of silence before he’d acknowledge her again. And when he did, it was with frozen undertones and one-word responses. He always held the upper hand because he got them where he always wanted them. Feeling insecure, feeling scared to go and frustrated. He needed the women to always look like the one responsible for the break, so he was trying to force her hand.

She would never act out in public, however. She couldn’t, and he knew that. She figured out over a period of several months that she was just someone he was monkey gripping onto until he could swing towards a better opportunity. And this morning she saw a brief news banner discussing that there was a film being shot in the same town her husband happened to take her to, it did not surprise her when she learned that Evelyn Stone was cast as the lead in a movie. Her sudden jump to the A-list territory eclipsed the low-budget roster of films Vera happened to get roles in. She had made the unfortunate mistake of letting her relationship with Corbin turn into a drain on her career.

His reputation as a man whore basically ruined their entire relationship. Every social event they went to there were shady whispers just within earshot about how they’d sighted Corbin in the arms of other women. She noticed when people would shift their eyes to her very quickly as if surprised she was there. So when the realization hit that Corbin had made an excuse to come to this random-ass town in Germany (he claimed it was a romantic getaway) so he could try to worm his way towards his ex, she wasn’t surprised. If anything, she fully expected it because she knew he needed his power move to function. In a way, she respected that he was able to play her that well. She was going to shift into the role of “another crazy ex” with the rest of the women he made sure to encourage her not to like. It was a bitter taste.

She did and didn’t want to fight for him. She knew that’s what he got off on at the end of his relationships…trying to make them beg just to get his attention. To get him to listen. To get him to stay. He would basically torture you until you decide to leave so it always looked like it was the woman’s (and one time, man’s) fault. He didn’t want you sexually at all because he was already resolving his needs elsewhere and whenever he had to be around you, it would be with sour whiskey breath and snarky comments. His mentally abusive tactics dug deep and she was at the point where she was incredibly self-aware and almost marveled at the complexity of his sadistic genius. But being in the public eye came at a huge cost and they both just kept quiet about it for the sake of posterity.

He knew she knew he was being unfaithful and almost got her where she would blame herself for it, even though she clearly had been loyal and attentive. He just got bored easily and started to crave the chase again. Every woman in his path was just one of the stops until that boredom sank in again. Usually, it would only take a few months before he’s already roaming, looking for his upgrade. Evelyn just became the hot commodity his reputation needed. It would also “debunk” the public opinion that he was on bad terms with all of his exes. She was important for breathing life back into his reputation and knew how to work it in his favor. But Vera wasn’t quite sure if Evelyn would fall for the bullshit a second time.

He had done so much cheating that he socially painted himself into a corner where he couldn’t upgrade to anyone of substance for a long time. Some of the bigger names in the industry won’t even return his agent’s calls because he had essentially been outed as fucking his way up the ladder instead of having any actual worth and contribution to the community. People weren’t really interested in his acting anymore because he was so one-note with his performances in random cheesy rom-coms and one really cliched cop film. He wasn’t getting any younger and certainly not getting anywhere financially.

Corbin had an embarrassing call recently from his agent because he was asked to consider a role in a commercial for a male impotence solution, claiming he’d be appealing to the “silver fox” crowd. Of course, his attention is sliding back to the one woman that hadn’t spoken publicly about their relationship or friendship at any stage, so he could still look like the good guy once he left Vera (if Evelyn agreed to it). He needed a major victory to feel better about himself. Nabbing Evelyn again would put him back in the industry’s good graces.

Evelyn had remained quiet for years as far as her dating life went. Her breakup with Corbin had put her on the map with the media but she never gave any details or confirmation. She kept her focus on her craft and threw out some amazing performances. Her humility and grace after a very public breakup left her a target because he could try to woo her back into a relationship with him and he’d have a massive platform to work with for a while. He’d definitely get more attention and attention turns into more offers for work. She was a gold mine for him to raid.

But the reason why the breakup was even public, to begin with, was that Corbin got engaged to the woman he was cheating on her with not even a week after he broke up with Evelyn. However, to the public, it looked like he jumped directly from Evelyn to the next woman without skipping a beat. The paparazzi started digging and found out what was really going on and smeared the front pages of every magazine worth following for trashy (yet accurate) celebrity stories.

All but three months of Evelyn’s relationship with Corbin overlapped with the next woman. He even accidentally sent Evelyn proof that he was cheating on her when he wanted to reminisce about their relationship and they were exchanging pictures through a messenger app. One of the pictures that were sandwiched between their couple’s snaps was a picture of the woman he was engaged to at the time, sitting on his lap in a leather chair Evelyn had purchased for him as a gift during their relationship. He kept it in her studio. He had brought that woman to Evelyn’s studio while he was still dating her.

Their resulting relationship was short and bitter as they took a swan dive into property investment (which he never forked money over for and just ran like he paid for everything) and when his then-wife demanded he stop sleeping with other women in the industry, he started blatantly sleeping with other women in her own house until she snapped and earned the first “crazy ex” crown. The divorce was quick and ugly. After a string of other flash-in-the-pan relationships with some increasingly popular women and a well-known male socialite with ties to the fashion industry, Corbin eventually honed in on Vera. And Vera was entirely naive.

Vera never met Evelyn directly but they hung out in overlapping circles. She knew of her, and Evelyn knew of Vera. Evelyn knew that Vera was married to Corbin and if Corbin approached her, Evelyn could easily buy into it so she can return the pain she once felt. Or she could remember that pain and tell him to go fuck himself. Either way, Vera knew her journey with him was over and she decided she was going to get high and allow herself this little bit of time to feel sorry for herself. She wasn’t about to dwell on it long.

He had told Vera to put on his favorite lingerie and style her hair his favorite way, murmuring about what he was going to do between her thighs when he got back. She obliged and pulled on the comfortable strappy black bra and panties set, and styled her blonde hair into loose waves. She had tucked one of the delicate lilies he bought for her behind her ear and pulled on her cotton candy pink robe. She was dressed like she was ready for an event she knew wasn’t happening. She was just playing her part as an attentive wife and he was playing his role as her dutiful husband.

Neither one of them meant any of it. Their hearts had been long detached. But what he didn’t know what that Vera was going to beat him to the punch. She may have dressed the part, but someone was definitely going to rip it all off tonight. She decided to force his hand instead. It was time to draw first blood.