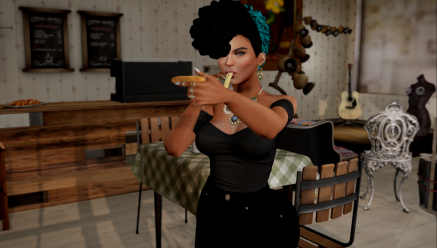 In the sleepy town of Poultney, Brianna smiled as she put her piping hot pizza down on the café counter, breathing a sigh of relief. She had been working by herself in her little coffee shop and the local college students kept her busy.  It was the moving in weekend for a lot of them and they came in small groups, often with their parents, to grab a glass of the popular blueberry and mint iced tea made or the variety of baked goods Brianna would make and put out throughout the day. The mountain-region town was unusually hot, even for the end of summer. Usually, the evenings would be a bit brisk, but the heatwave had persisted and left the evenings a little more humid than usual.

Brianna spun around, startled when she heard the shop doorbell ring behind her. She had forgotten to lock the door after the pizza delivery driver dropped off her large pepperoni and cheese. She imagined she looked ridiculous as she just stood there with a long string of cheese trailing from the pizza to her mouth and squinting against the glare of the streetlights against the glass panes in the door. A man stood near the entrance with a slight smirk on his face.

He was a tall, almost lanky guy with a mop of dark brown hair. As he stepped over the threshold she noticed that he had an ornate dragon tattoo on his forearm. The sleeves of his plaid shirt were rolled up and the untucked shirt loosely hugged him. Streaks of dirt broke up the otherwise dark blue jeans he was wearing. He looked like he had been gardening. His eyes were almost a steel grey and looked almost haunting from behind the dark loose tendrils of hair. The light wind gushed through as he shut the door behind him.

Embarrassed, Brianna scooped up the dangling cheese and dropped it into her mouth as she finished chewing, setting the rest of the slice on a side plate. She felt the heat rise to her face as she wiped her hands on her apron. “Sorry, I didn’t realize that I hadn’t locked the door after I ordered from across the street,” she stammered. “You may as well grab a slice for yourself if you’re up to it.”

The man chuckled and walked slowly towards the small café table she stood next to. “Thank you, that’s very sweet of you. My name is Leon. I’m the new soccer coach over at the college. “

He extended his hand out and waited to shake hers. Brianna accepted it hesitantly and pumped her hand twice, firmly. She smiled as she withdrew her arm and dove her hands into the pocket of her apron. She didn’t know why, but she made him a bit nervous. Not in a way that made her feel unsafe, but there was something quite disarming about him.

“I’m Brianna. Bri for short. I actually graduated from there- now I teach an art class twice a week in the evenings for the students and the community. Figured it’s my way to give back outside of my business here.”

Leon nodded and smiled, taking a look around the café. Brianna had poured her heart into creating the space four years ago after she and some old classmates decided that they were going to invest in businesses in the sleepy town to encourage some growth. The college campus held more population than the town did and until some young adults decided to buy up property locally to stimulate the potential the town held, its main functions were limited to a single street that led up to the college.

Brianna and her small group of friends collectively diversified the town in both background and choice of business. Besides her café, her friends have also opened a dance studio, a small movie theater that ran nothing but old classics and a gaming shop that appealed to the geek culture in the college and served as an alternate space to study in for many of the students. They were able to get the students to be more interested in what Poultney had to offer, rather than driving a half hour out to Rutland to do some of the same things. Brianna even offered her art class for free to the small community so they would show an interest in doing things locally as well. It brought a breath of fresh air to the town.

Seeing that people were willing to invest and spend in Poultney brought about this new life. The existing businesses started to find inspiration to shake things up a bit and make an effort to appeal to the demographics that were looking to spend. The bank, which used to only have three bankers employed at any given time, had to triple that number due to the volume of new accounts and business. The grocery store was able to start increasing the volume of locally-produced foods they were purchasing for their inventory, which helped the local industry offer affordable fresh goods without exporting most of it. Young couples were starting to snap up properties and even build as it became an up-and-coming town. You had the convenience of a small town but a lot of modern tweaks and a great college that you could attend for free as a resident of Poultney. It was essentially a hipster magnet. It was the perfect place to settle down and everyone had an interest in maintaining the small-town integrity.

Brianna also worked as an author in her spare time. Her handful of novels earned her rather reasonable sales in the e-book market and gave her the flexibility to invest in the café. She enjoyed the opportunities she had to work on her next manuscript on slow days at the shop or even while chatting with some patrons over a cup of rooibos tea. It was ultimately her idea of a perfect life. A lot of the herbs and produce she used in her menu originated from her impressive greenhouse, chicken coop, and blueberry bushes. The cozy café was attached to the main part of the building, which served as her home. She enjoyed the life she had created in Poultney and the members of the community had been incredibly supportive of the initiative.

Leon’s eyes traveled over the wall of framed monochrome photography and nodded towards it before reaching for a slice of pizza. It was a mix of urban and nature photography that Brianna had taken over the years. She had always noticed how it was almost a timeline of how she went from living in the city to living a much greener and happier life out in the middle of nowhere.

“Those photos are amazing. Are they yours?”

Smiling, Brianna nodded. “Yep. They’re a sample of my favorites from over the years. I spent a lot of time just traveling and focusing on photography and exploring. I miss it sometimes.”

“You should definitely do more of it. It’s gorgeous.”

Brianna watched as Leon focused on the photos silently for a while longer, almost absentmindedly taking bites of his pizza. She didn’t even realize she didn’t know what he was doing in the shop. “I’m so sorry, my manners. I forgot to ask what you were looking for. I know I closed up but I’m sure I can grab you whatever you need.”

Leon turned to her and smiled. “I almost forgot what I came here for. One of the professors on campus had suggested I come here to grab something for an early dinner and a coffee, but I don’t want to inconvenience you. I haven’t done much grocery shopping yet and my cabinets are bare. The cafeteria is only going to be up and running tomorrow.”

Brianna smirked. “Well, you’re getting some pizza out of the deal, so at least you can say you were fed. I can throw on a fresh pot of coffee though. I live onsite so it’s no bother. I could use some myself since I have to stay up late to work on a manuscript. “

“If it’s not any trouble, that would be great.”

Taking a deep breath, Brianna retreated behind the café counter to start making a pot of her favorite Ethiopian blend. She watched Derrick out of the corner of his eye as he slowly walked the perimeter of the café to observe all of the art on the wall. It almost piqued her curiosity as to why he ended up becoming a soccer coach instead of something in the arts. Nothing about him really screamed ‘jock’.

Over the course of the next hour and a half, Brianna and Leon polished off the rest of the pizza and most of the coffee as they got to know each other a bit. She told him about her extensive and loving history with the college and how she held an art therapy degree from there. He explained how he used to work a six-figure job in marketing and decided to leave that behind to focus on being a coach for a sport he loved. He stumbled across his dream country house online and put a bid in after driving several hours from Pennsylvania to just take a look at it. It was accepted the same day. He had Brianna’s full attention as he described his free-fall into a career he hadn’t planned on. She was impressed.

He abruptly looked at his watch and hopped up from the chair. “Shit, sorry, I need to run home. I didn’t even realize how fast time flew. It was nice to be able to sit down and actually have an interesting conversation that wasn’t knee deep in college politics.”

“Ah, yeah,” Brianna said with a grin. “It’s a major fishbowl environment. Expect a lot of that. It’s pretty hard to avoid when the town is built around the school, you know?”

A smirk flashed across Leon’s face as he hooked his thumbs through his belt loops and rocked on his heels twice. “It was nice meeting you, Brianna. I hope I’ll see you again soon.”

Brianna waved his hand away when he went to pay for his coffee. Leon thanked her then reached out and shook her hand again before picking his keys up from the table and retreated towards the door, wishing her good night. Brianna followed and locked the door behind him as he walked down the main road of the town back towards the picturesque brick and ivy college at the end of it. Something in her gut told her to make sure to talk to him again. She didn’t realize until he was long gone how exciting it was just to sit and have a conversation with him. He intrigued her.

As the sweeping blanket of darkness from the fading sunset spread across the town, Brianna switched her store sign to ‘Closed’ and went through the back door that let into her private residence, locking it behind her. She had a million questions about what just happened. She could only hope she’d see Leon again to get answers to them.